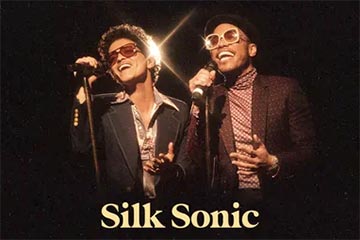 Silk Sonic is performing at the Dolby Live at Park MGM in Las Vegas, Nevada on select dates between May 4 and May 29, 2022.

Silk Sonic is an American R&B superduo composed of singer Bruno Mars and rapper and singer Anderson .Paak. The duo released their debut single, “Leave the Door Open”, in March 2021. They later released “Skate” in July 2021, followed by their debut album, An Evening with Silk Sonic and their third single “Smokin Out the Window” in November 2021. The album peaked at the number two on the Billboard 200, while the three singles released all reached the top twenty on the Billboard Hot 100, with “Leave the Door Open” spending 18 weeks in the top ten and two non-consecutive weeks at the top spot. Silk Sonic has won four Grammy Awards.