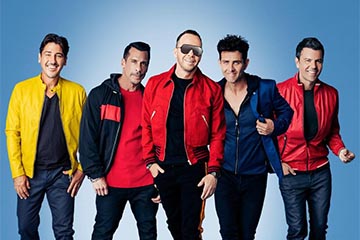 New Kids on the Block

The New Kids on the Block are performing at the Michelob Ultra Arena at Mandalay Bay Resort and Casino in Las Vegas, Nevada on Sunday, May 29, 2022 at 7:30 PM.

New Kids on the Block (also initialized as NKOTB) is an American boy band from Dorchester, Massachusetts, United States. The band consists of brothers Jonathan and Jordan Knight, Joey McIntyre, Donnie Wahlberg, and Danny Wood. New Kids on the Block enjoyed success in the late 1980s and early 1990s and have sold more than 70 million records worldwide. They won two American Music Awards in 1990 for Favorite Pop/Rock Band, Duo, or Group and Favorite Pop/Rock Album. The group originally disbanded in 1994; then, after 14 years, they reunited in 2008.

Citation: New Kids on the Block. Retrieved from: https://en.wikipedia.org/wiki/New_Kids_on_the_Block