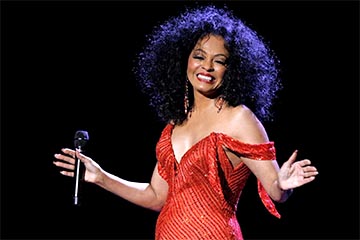 Diana Ross (born March 26, 1944) is an American singer and actress. She rose to fame as the lead singer of the vocal group the Supremes, who became Motown’s most successful act during the 1960s and one of the world’s best-selling girl groups of all time. They remain the best-charting female group in history, with a total of twelve number-one hit singles on the US Billboard Hot 100, including “Where Did Our Love Go”, “Baby Love”, “Come See About Me”, and “Love Child”.

Ross was named the “Female Entertainer of the Century” by Billboard in 1976. Since her solo career began in 1970, Ross has released 25 studio albums, numerous singles, and compilations that have sold more than 100 million records worldwide. She is the only female artist to have had number-one singles on the Billboard Hot 100 as a solo artist, as the other half of a duet, as a member of a trio, and as an ensemble member. In 2021, Billboard ranked her the 30th greatest Hot 100 artist of all time. Her hits as a Supreme and a solo artist combined put Ross among the Top 5 artists on the Billboard Hot 100 singles chart from 1955 to 2018. Ross was inducted to the Rock and Roll Hall of Fame as a member of the Supremes. She was the recipient of a Special Tony Award in 1976, the Kennedy Center Honors in 2007, the Grammy Lifetime Achievement Award in 2012, and the Presidential Medal of Freedom in 2016.