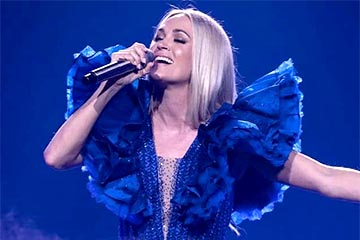 Carrie Underwood is performing at the Resorts World Theatre in Las Vegas, Nevada on select dates between May 11-21, 2022.

Carrie Underwood is an American singer and songwriter. She rose to prominence after winning the fourth season of American Idol in 2005. Underwood’s debut single, “Inside Your Heaven”, made her the only country artist to debut at number one on the Billboard Hot 100 chart and the only solo country artist in the 2000s to have a number-one song on the Hot 100.

Underwood has sold 70 million records worldwide. She is the sixth highest-certified female artist and the highest-certified female country artist of all time on the RIAA’s Top Artists (Digital Singles) ranking, and the female artist with the most number-one entries on the Billboard Country Airplay chart, with 16. Her accolades include seven Grammy Awards, 12 Billboard Music Awards, 17 American Music Awards, five Guinness World Records, 15 Academy of Country Music Awards and inductions into the Hollywood Walk of Fame and the Grand Ole Opry. Billboard named her the top female country artist of the 2000s and 2010s and Some Hearts the top country album of the 2000s. Time listed her as one of the 100 most influential people in the world in 2014, while Forbes declared her the most successful American Idol winner.