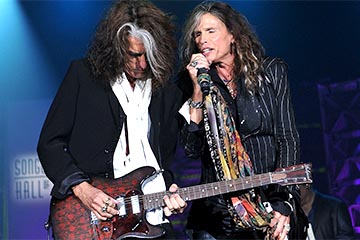 Aerosmith is performing at the Dolby Live at Park MGM in Las Vegas, Nevada on select dates between September 14 and October 5, 2022.

Aerosmith is an American rock band formed in Boston in 1970. The group consists of Steven Tyler (lead vocals), Joe Perry (guitar), Tom Hamilton (bass), Joey Kramer (drums) and Brad Whitford (guitar). Their style, which is rooted in blues-based hard rock, has also incorporated elements of pop rock, heavy metal, glam metal, and rhythm and blues, and has inspired many subsequent rock artists. They are sometimes referred to as “the Bad Boys from Boston” and “America’s Greatest Rock and Roll Band”. The primary songwriting team of Tyler and Perry is often known as the “Toxic Twins”.